The Pennsylvania Sewage Facilities Act (Act 537) was enacted by the Pennsylvania Legislature in 1966 and requires every municipality in the Commonwealth of Pennsylvania to develop and maintain an up-to-date Act 537 Sewage Facilities Plan. The purpose of the Act 537 planning process is to protect the health, safety and welfare of the citizens living in a municipality, to prevent future sewage disposal problems from occurring, and to provide protection for the groundwater and surface waters of the Commonwealth. An Act 537 Plan should be updated when the existing Plan is out of date, is inconsistent with other municipal planning, does not provide adequate solutions to resolve existing sewage disposal problems, or is needed to provide for planned growth.

In late 1996, a study was conducted at the Allison Park WPCP to determine the sources of odor. The study yielded the conclusion that the Activated Biological Filter (ABF), constructed as part of the 1991 expansion project, was a significant source of odor at the WPCP. Further investigation into the reason for the odor from the ABF determined that the process was not contributing to plant performance. As a result, the ABF unit was removed from service in April 1997.

Several technical evaluations were completed between the late 1990’s and the early 2000’s to monitor plant performance without the ABF unit. Subsequently, the Pennsylvania Department of Environmental Protection (PADEP) allowed the WPCP to continue operation with the ABF unit out of service provided that the National Pollutant Discharge Elimination System (NPDES) Permit effluent limits are met. Since that time, the WPCP has operated without the ABF and has consistently met all NPDES Permit limitations. However, the remaining equipment is nearing the end of its useful life necessitating an upgrade of the WPCP and the precursory development of this Act 537 Sewage Facilities Plan Special Study.

This Special Study was developed by Hampton Township to evaluate options to strategically upgrade the existing Allison Park WPCP to efficiently produce an effluent discharge quality that consistently complies with present and future influent loads and possible effluent requirements. While the recommendations of this Special Study have an inherent impact on the entire service area, many of the analyses included herein are specific to the site of the Allison Park WPCP where all proposed construction will occur. This Special Study was prepared in accordance with the PADEP document entitled, A Guide for Preparing Act 537 Update Revisions. It includes a thorough environmental review of the proposed wastewater infrastructure projects through the standardized Uniform Environmental Review (UER) process. The UER report is included in Appendix A. The Special Study contains all applicable information to provide adequate planning, as outlined on the PADEP document entitled, Act 537 Plan Content and Environmental Assessment Checklist, provided herein as Appendix B.

The following issues and concerns were identified at the Allison Park WPCP, resulting in the development of this Special Study:

* The equipment is nearing the end of its useful life. For example, the belt filter press is 31 years old and replacement parts are difficult to obtain.

* The rotating drum screen and the comminutors require constant maintenance and are not effective in the treatment process.

* The mechanism and walkways for the secondary clarifiers are deteriorating and require replacement.

* Odors are a constant problem and can only be fully addressed by proper screening, grit removal, and process modification. Significant primary odor sources include the sludge blanket in the primary clarifier despite efforts to keep the sludge blanket as low as possible, fat, oil and grease, sludge dewatering and the aerobic digester.

* The WPCP is limited hydraulically and organically by the activated sludge aeration basins. Issues with the aeration tanks include lack of freeboard, flow distribution issues and insufficient detention time. The detention time in the aeration tanks is significantly shorter than the PADEP criteria governing aeration in the carbonaceous/nitrification conventional activated mode. The capacity is only 1/3 of the design rating of 3.2 MGD for which the facility is rated. It should be noted, however, that this is based on empirical standards and not the actual kinetic factors of the wastewater and the process. The WPCP has consistently met all NPDES Permit effluent limitations.

* Limitations in the aeration system suggest that capacity problems may also exist as organic loads are transferred to the aerobic digesters. The failure to thicken sludge to the desired 4% solids level as designed increases the volume of the sludge transferred to the aerobic digesters. Thus, the sludge is only partially stabilized and desired volatile solids destruction is not achieved. Additionally, the digesters do not meet the volumetric standards for residence time based on stabilization regulations. These factors affect the ability to achieve Federal Class B standards required by the PADEP for landfill disposal.

* Primary sludge is being sent to the aerobic digesters. This is not typical and contributes to the stabilization issues.

* The lack of proper thickening of sludge results in a less than optimum sludge being sent to the belt filter press, thus the costs to landfill the pressed sludge are higher.

* The use of chlorine gas for disinfection has the potential risk of a release.

* When flows approach 12.0 MGD, the influent gate is throttled to prevent the comminutor chamber from flooding. This results in wastewater backing up and exiting the collection system through manholes. Gate throttling is reported to the PADEP and the Allegheny County Health Department (ACHD) and results in sanitary sewer overflows (SSOs), which are a violation of the Township’s NPDES Permit.

* The Township’s current NPDES permit expires on October 30, 2018. More stringent regulations are on the horizon. The new permit could have nutrient limits, a more stringent limit for fecal coliform, or both.

* There is only one restroom available for the entire WPCP staff.

* There is a need for a garage to house vehicles, including the vactor truck, with storage out of floodway.

The following upgrades, identified as Alternative 1 herein, are proposed to address the issues, concerns and needs identified herein:

* Construct new garage to house vehicles, including the vactor truck, with storage out of floodway

The advantages of the SBR include simple operation, it is a proven technology, it handles variation in flow/loading, it eliminated the need for primary clarifiers, secondary clarifiers and return sludge pumps, and it is capable of removing nitrogen and phosphorus through biological nutrient removal (BNR). All of the proposed improvements will be constructed in a single project.

In addition to the issues identified at the Allison Park WPCP, the Township’s Glannons Pump Station has experienced SSO events throughout the past few years. A total of six (6) SSO events occurred in 2015 and three (3) occurred in 2016. The Township notifies the PADEP and the ACHD when SSO events occur. In order to address the SSOs, the Glannons Pump Station will also be upgraded as a result of this Special Study. The existing pump station site is very limited and would not allow for any expansion of the existing pump station. The Township will therefore evaluate two (2) alternative sites for relocation of the Glannons Pump Station. The proposed upgrades will involve land acquisition, site work, demolition of the existing pump station, new pumps, piping and controls, a wet well, electrical improvements and a new generator. The Township is currently conducting flow monitoring at the site. The need for increased capacity will be evaluated and quantified during design using the results of the flow monitoring efforts.

The user rate projections are for planning purposes only and do not account for any variation in rate between residential and non-residential customer. The final rates will be determined by the Township. The Township then has the ability to adjust the rate annually as necessary to meet debt service and O&M costs.

The Township has taken a proactive approach to project planning. The Act 537 Sewage Facilities Plan Special Study provides a logical and structured approach to planning which will outline clear project phasing for detailed design, permitting, financing and construction. This Special Study will ensure that the proposed improvements are both technically and economically feasible and that the Township’s goals are met. There are no significant administrative issues, organizational needs or deficiencies in legal authority necessary for implementation of the recommendations made within this Special Study. Therefore, the improvements proposed herein will be implemented under the existing authority of Hampton Township. The existing service agreement with Richland Township will remain. Hampton Township will continue to own, operate and maintain the Allison Park WPCP upon completion of the upgrades proposed herein.

The anticipated schedule of implementation of the Special Study, contingent upon receiving favorable funding, is included in Table 1 below. 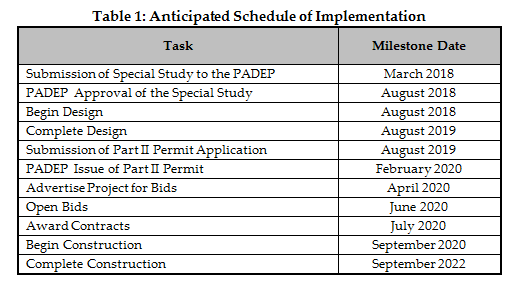